The Evolution of Interior Columns

If there is an element of interior decor that seems to have come into existence with the dawn of creation, it is interior columns.

Think back to the events that columns have borne witness and the places in which they are a significant architectural feature: The extension of the Roman Empire across the ancient lands. The tale of the mighty, Biblical Samson who, leaning upon the Philistine temple pillars, used the last of his strength to enact his vengeance. The great, Mount Olympus, where majestic columns line the home of Zeus and all other Olympian god.

Interior columns have stood firm with every new age, morphing and adapting to each era yet remaining as regal as ever. Today, they have come a long way and seen enormous evolution in style, shape, material and purpose.

Where it all began...

In centuries past, the column was an architectural invention that allowed for the support of ceilings without the use of solid walls. They could also be incorporated within walls or used freestanding, carrying sculptures commemorating events or people. They were used in the peristyles of temples and on colonnades.

Classical Greek and Roman architecture employed different orders of pillars, which were carved from single blocks or built from stacks of enormous stone blocks. Over time, three orders became the foundation of interior column architecture and are hailed as so even today- Doric, Ionic and Corinthian.

The Doric order is considered the simplest and perhaps the oldest. The column was stouter than the other two, often came without a base, and the capital tended to be round and plain. Some of the most significant and magnificent displays of Doric columns are the Greek Parthenon, dedicated to the goddess Athena, and the Temple of Hephaestus

The Ionic order is mostly distinguished by the scroll-like ornamentation on the capital of the column. The column also came with a base, a feature that wasn’t common with the Doric style. Majestic shows of the Ionic columns included the Temple of Artemis at Ephesus, famed not only for its size but also the artistic adornment. Though little remains of it now, it is not surprising that it was once one of the 7 wonders of the world.

The Corinthian column is easily recognizable by its fluted shaft and the elaborate capital that bears acanthus leaf carvings. These columns were a big feature of the Temple of Olympian Zeus, destroyed centuries ago. Closer to our era, are the U.S. Supreme Court building and the US Capitol.

Columns, usually huge and circular, were utilized to great effect in Ancient Egypt and the Middle East to embellish and support massive constructions, especially in the absence of arches. Shafts in Eastern architecture are often simple in design, but highly ornamented.

Craftsmen of the Gothic and Romanesque periods carved intricately onto the bases and capitals of supporting stone shafts. Sinuously carved marble pillars were frequently used in Baroque designs.

Since then, interior columns have changed, just as they have remained the same. They can be rectangular, round, or polygonal, and their diameter can be uniform or taper toward the top.

An engaged, attached, or immersed shaft is one that is constructed into a wall and protrudes just partially from it; in the Roman pilaster, this sort of column came to have an ornamental rather than structural role. 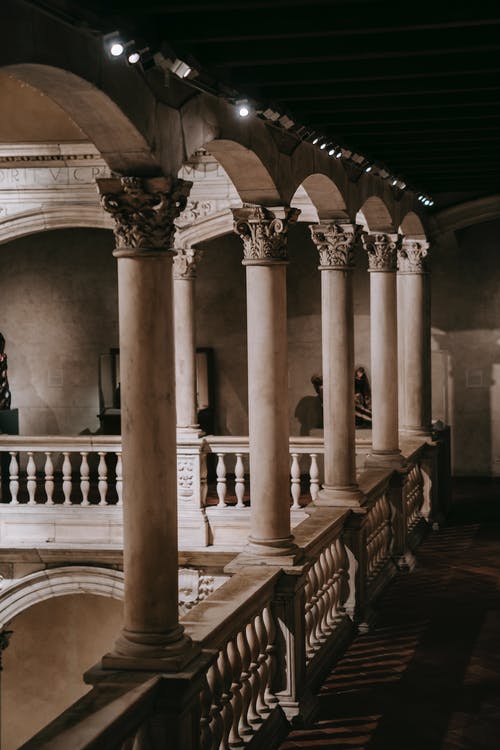 Different types of materials have been utilized throughout the history of pillars. Wood, for example, has been one of the most commonly used building materials since the first pillar was built.

Wood columns were first employed in Ancient Greece and have remained popular due to their great durability and stain-grade ability. Since then, other materials such as stone were embraced and subsequently cast aside as architectural styles changed and as the purpose for the columns also shifted.

Materials used for interior columns across time include:

Ancient Egyptians used concrete over four thousand years ago. Romans fortified the normal material by incorporating pink sand generated by volcanic ash. Concrete constructions might now bear more weight and decay at a slower rate as a result of this.

Fiber Reinforced Polymer FRP has been used since the early 1930s, but its origin has been traced back to the Israelites of 800 BC, who reinforced bricks with straw to provide added strength.

After World War Two, fiberglass materials were used to construct boat hulls and during the 50s, the automotive industry introduced fiber reinforced composites.

The mold is spun so that the centrifugal force pushes the mixture to the outside of the cast. By the time the mold is done spinning, a column with a load bearing capacity of pounds is formed.

Today, columns have been embraced in homes less for their supportive role and more for their aesthetic appeal. For this reason, it is no longer mandatory that they be made as load-bearing shafts.

With this feature, more affordable and lighter material has come to the fore. Architectural polyurethane is light and easy to install. It is resistant to both moisture and temperature changes and will make durable interior and exterior columns. Our vast portfolio of polyurethane columns includes round, flat and half columns that are plain and elegant, or heavily embellished and eccentric.

7 trends in style and use of interior columns

Pillar design and architecture have immensely evolved over the years. Modern interior columns are made of materials that are favorable to craft and style, e.g. wood and polyurethane.

Interesting designs and trends have emerged in recent years, bringing attention to columns as a focal point in a room.

Who says a pillar has to be bland? Try abstract styled columns with a multicolored touch to bring the space to life. To balance this out, keep the walls simple with hues such as cream or white, a neutral palette, or even a pastel aesthetic.

A lovely shaft incorporated into an open floor plan enhances the look of the kitchen and creates a subtle barrier separating the rooms. Consider an all-wood interior design with an orange, brownish backsplash. Strong lighting is chosen to complement the concept.

Ordinary pillars can be transformed into creative media centers by arranging them to seemingly support bookcases, the TV station, or home entertainment system.

Why struggle to find extra room to set up as a separate bar for your guests?

Instead, be creative with the column and turn it into a bar counter or a wine rack. The area is nicely arranged so that it can store additional bottles on top for another day.

Columns can be readily included into designs. Instead of long, clunky elements, opt for compact, modern-looking pillars. Square and round shapes are combined to create a more interesting aesthetic.

Where there is a need for a pillar on the front entrance, why not make it a royal affair? Incorporate a  set of arch-shaped columns and choose a good finish on top to highlight the unique work.

The element of class and refinement in the square shape pillar is used to add a refined appeal to the living area. You can have a stunning black laminated column installed in your dining or living room space. This will provide a charming touch and elegantly complete the aesthetic of your area.

It cannot be argued that interior columns have been an integral part of interior decor for generations. While their design and use have shifted, they perhaps remain as the true embodiment of every passing civilization, a mark of where great men and women once stood. Perhaps when we too are gone, the contemporary pillars of our age will endure as proof of our iconic artistic leanings. 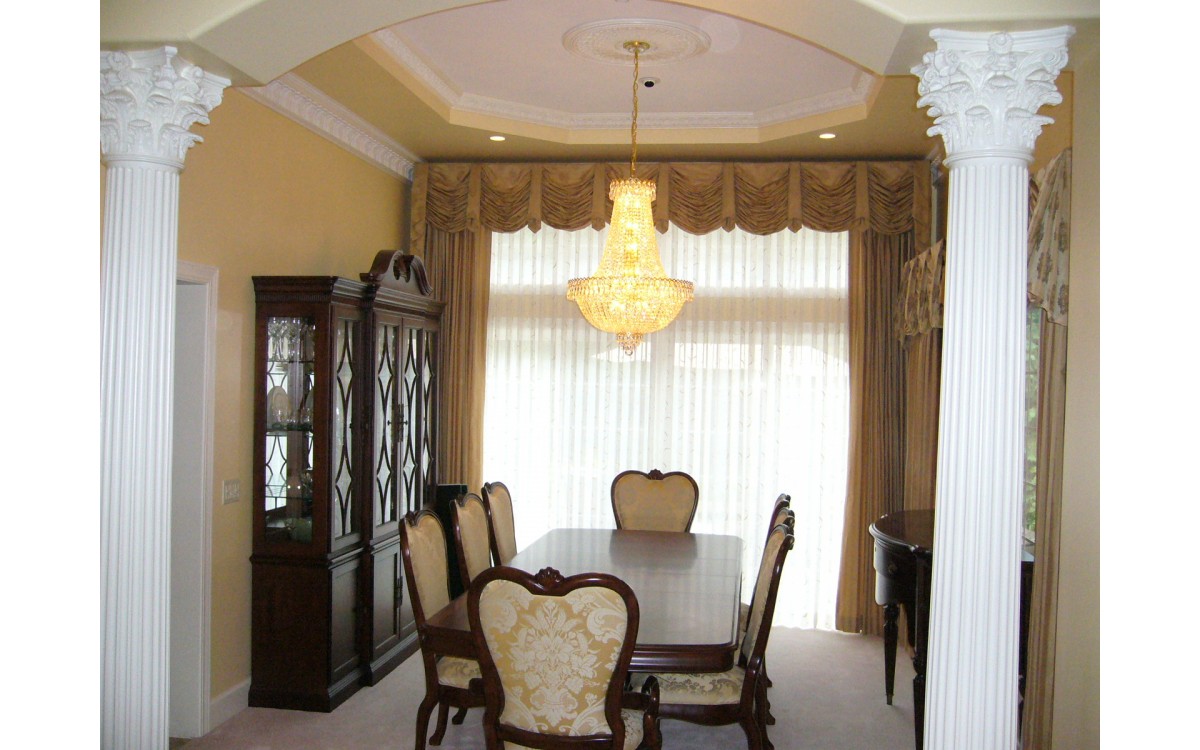 4 Great Color Options for Interior Columns
If the architectural elegance of interior columns isn't enough, you can further enhance their appearance by choosing paint colors....